Walt Disney brought the art of animation from the silent, black-and-white shorts of the 1920s to the rich, full-length feature films of the 1960s. Although he didn’t live to see the digital age, Walt Disney was instrumental in the development of modern-day movies and TV. Disney strived to entertain children and parents alike, bringing together well-developed plots and characters, memorable music and sound, and breath-taking imagery. He always dreamed of inventing the next great thing in entertainment, and Walt’s crowning glories, Disneyland and Disney World, are still the most popular theme parks in the world. 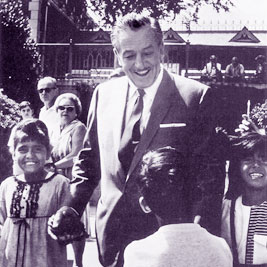 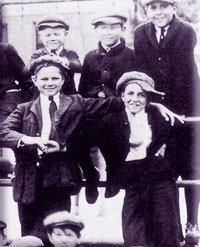 In 1910, Elias Disney sold the farm and moved to Kansas City where he bought a newspaper delivery business. Walt and Roy were given jobs to deliver the Kansas City Star and other papers. When Walt was 14 years old, his parents enrolled him in art classes at the Kansas City Art Institute.

In 1917, Walt took a summer job that made a lasting impression—he sold concessions on the Santa Fe Railroad, where he developed a love of trains. After that, he attended McKinley High School back in Chicago. At McKinley, Walt contributed drawings to the school paper and continued his art instruction.

When Walt was 16, he wanted to enlist in World War I, but he wasn’t old enough. However, he found a way to join the war effort by becoming a Red Cross ambulance driver. It’s said that young Walt decorated his unit’s ambulance with cartoons!

In 1919, Walt returned to the U.S. and started a job at the Kansas City Slide Company where they made commercials using crude stop-action animation. Walt and animator Ub Iwerks left to start their own enterprise which they called Laugh-o-Grams. They had initial success making short animated commercials for a local theater. Then, Walt came up with the idea of putting a young actress into the world of cartoons— the result was Alice’s Wonderland. Unfortunately, the business ran out of money and had to close. But Walt didn’t give up; he moved to Los Angeles and eventually made more Alice films. The Alice Comedies became a success and Walt was able to hire more employees. One of them was Lillian Bounds whom he married on July 13, 1925. 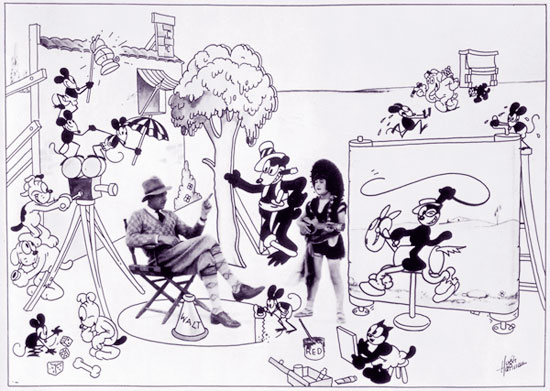 With almost 60 episodes of the Alice Comedies completed, Walt decided to change course and concentrate on full animations (without actors). So he and Ub developed a new cartoon character called Oswald the Lucky Rabbit (who bears a resemblance to Mickey Mouse, but with long ears and furry feet). That series became very successful, but due to a legal issue over who owned the rights to the Oswald name, Disney had to stop working on it. 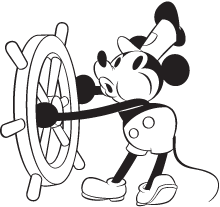 Not one to let a setback keep him down for long, Walt Disney quickly started working on a new character with Ub: Mickey Mouse.

Back in those days, there were only silent, black-and-white movies. But on October 23, 1927, Warner Bros. released the first movie with sound (or “talkie”), The Jazz Singer, and it rocked the motion picture industry, prompting Disney to go back to the drawing board and figure out a way to add sound to his animated films. In 1928, Mickey Mouse debuted in Steamboat Willie, the first cartoon with a fully synchronized sound track. Walt himself was the voice of Mickey
Mouse—and continued to voice the character for nearly twenty years.

The following year brought the Great Depression, but Mickey Mouse was a huge success and became an international star with the help of his friends (Pluto released in 1930, Goofy in 1932, and Donald Duck in 1934). 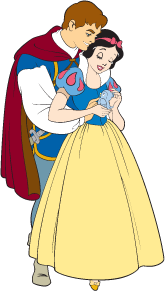 THROUGH THE DEPRESSION AND WWII

RESPONSIBILITY AT A YOUNG AGE

Walter Elias Disney was born on December 5, 1901, in Chicago, Illinois. He was the fourth son of Elias and Flora Disney. Later, a daughter, Ruth, was born. In 1906, the family moved to a small farm outside Marceline, Missouri. Young Walt and his brother Roy were expected to help out with farm chores. While on the farm, Walt began drawing.

Snow White and the Seven Dwarfs (1937). The Disney artists worked on it for over three years, inventing new animation techniques including the multi-plane camera to solve the unique challenges of a feature film. Snow White opened a few days before Christmas and was an overnight success. Next came Pinocchio (1940), Fantasia including The Sorcerer’s Apprentice (1940), Dumbo (1941), and Bambi (1942).

After the War – the Golden Age

In the fall of 1966, Disney learned that he had advanced lung cancer. The Jungle Book (1966) was the last animated feature he ever produced; it was not quite finished when he died on December 15, 1966, at the age of 65. 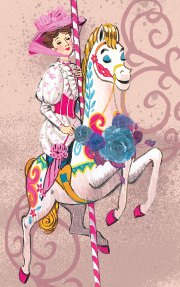 Walt Disney’s first real break-though in live-action movies was Song of the South in 1946. More success came with Treasure Island, one of four dramas filmed in the British Isles. In 1949, Seal Island won an Oscar for Best Short Subject and launched the True Life Adventure series, more than a dozen nature documentaries filmed between 1950 and 1960.

Walt Disney wisely retained the television rights to all of his movies. Davy Crockett was his first TV series and a big success in 1954. ABC was chosen to broadcast the shows. In return, they agreed to invest in Disneyland, a new theme park that was on the drawing board. Another tremendously popular TV series was The Mickey Mouse Club, on air from 1955 to 1959. 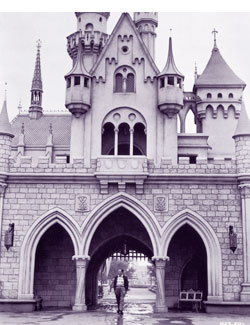 The idea for an amusement park that would be as entertaining for adults as it would be for children percolated in Walt Disney’s mind for many years. Formal planning of the first park started in 1952. A site was chosen in Anaheim, California. Disneyland opened on July 17, 1955, with a railroad around its perimeter, a beckoning Main Street, and the spectacular Cinderella castle on the horizon.

Disney started planning a second park on the East Coast and envisioned something even larger—it would be a self-contained vacationland, including hotels, camp grounds, and golf courses. It would have EPCOT (Experimental Prototype Community of Tomorrow), a city designed to be always 25 years ahead of its time. Disney himself chose the site near Orlando, Florida, but died before breaking ground. Walt Disney World was opened by Walt’s brother Roy Disney in October of 1971 with these words:

“Walt Disney World is a tribute to the philosophy and life of Walter Elias Disney… and to the talents, the dedication, and the loyalty of the entire Disney organization that made Walt Disney’s dream come true. May Walt Disney World bring joy and inspiration and new knowledge to all who come to this happy place… a Magic Kingdom where the young at heart of all ages can laugh and play and learn—together.”