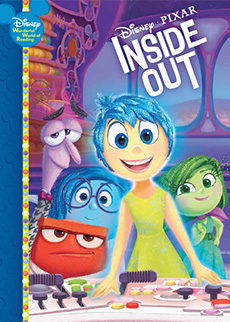 What’s going on inside the mind of Riley Andersen, a typical 11-year-old girl? See for yourself in this adaptation of the Disney·Pixar film Inside Out. It’s a story about Five Emotions that work together at Headquarters inside Riley’s mind. The Emotions guide Riley’s everyday actions. But when Riley moves from Minnesota to San Francisco, her Emotions struggle to keep things under control. Then two of the Emotions, Joy and Sadness, wind up outside Headquarters in the far reaches of Riley’s mind. Will Joy be forgotten forever? Beautifully illustrated in eye-popping colors, this imaginative tale is sure to touch your emotions at storybook time.

Tie-in Activity: Simon Says Be Happy. Play a version of the classic game of Simon Says. Have a leader act out an emotion, and encourage the players to express that emotion in their own ways. For example, the leader may say "be happy" and express it by dancing around. In response, a player may smile and clap his hands instead.