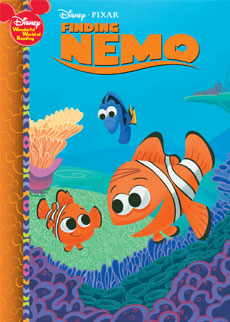 Based on the hit Disney·Pixar movie, Finding Nemo narrates the adventures of wayward Nemo, a young clown fish with an undersized fin whose reckless sense of adventure gets him kidnapped and stuck in a dentist’s office aquarium. The book chronicles the attempts of Nemo’s overprotective father, Marlin, and his cheery but forgetful sidekick, Dory, to find and rescue his son. Meanwhile, Nemo and his fellow captives hatch an escape plan of their own. Featuring a zany cast of characters and plenty of thrilling escapades, the book is sure to capture the imaginations of young readers, while teaching valuable lessons about overcoming physical differences and abiding by parents’ guidelines. This story will also tug gently at parents’ heartstrings with lessons about learning how to let go as your child grows.

Tie-in Activity: Take your kids on a field trip to a local aquarium or pet store to observe real fish. Point out their differences in size, color, and behavior. Identify the various parts of the fish, such as fins and gills. Challenge children to point out the fish that most closely resemble Nemo, Marlin, Dory, Bruce, and the other characters from the story.