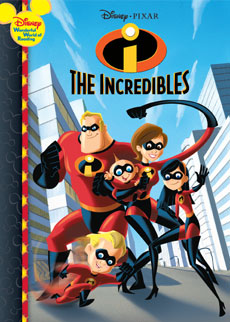 This intrepid story lets young readers imagine the possibilities of going through life as a real, live superhero. The Incredibles are a family of superheroes who have entered a witness protection program, hiding their true identities and powers from everyone in their community. Mr. Incredible longs to return to the world of heroism, but his wife is adamant about giving their three children a life of normalcy. When he goes behind her back and uses his superhero powers, he finds himself caught in a double-crossing trap that ultimately puts his whole family—and many others—in jeopardy. The Incredibles is filled with thrills, larger-than-life characters, and plenty of allusions to the importance of family.

Tie-in Activity: If your child could have any super power in the world, what would it be and why? Encourage her to create her own superhero character, complete with name, special powers, biggest weakness, and dashing ensemble. For younger children, help them draw a superhero or simply take them on a flying adventure through the house.