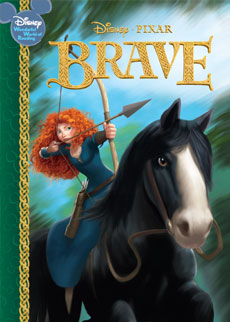 Disney·Pixar’s Brave brings the reader to the Scottish Highlands to tell the uplifting story of a refined queen and her adventurous daughter, Merida. The young girl wants to follow her own path, but not the one her mother has set for her. Feeling trapped, the girl tries to change her mother’s mind with a magic spell with some truly unexpected consequences for both of them. Now Merida must find a way to mend the bond between them before it’s too late. This inspiring story teaches all of us about having the courage to follow our own path, while appreciating the different strengths we find in each other.

Tie-in Activity: Merida is an excellent archer. Practice your target-hitting skills by using balled-up socks instead of a bow and arrow. Draw a target on a sheet of posterboard, cutting out the center so that the sock can easily pass through it (hint: bigger is easier). Punch a small hole in the top of the target and fasten a string to it. Hang the target in a safe, open area and see if you can throw the sock through the center hole.