One of the most popular American children’s authors and illustrators in history, Richard Scarry penned more than 300 books during his prolific career. More than 100 million copies of his books have been sold throughout the world in 30 different languages.

Born on June 5, 1919 in Boston, Massachusetts, Scarry was the son of prosperous shopkeepers. After a brief stint in business college, he enrolled at the School of the Museum of Fine Arts in his hometown, but with the start of World War II he was drafted into the U.S. Army. After his military service was over, Scarry worked as a graphic magazine until landing a contract with Little Golden Books in 1949, launching his celebrated career as a children’s author. 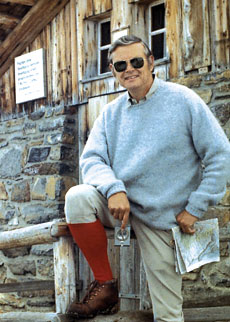 Scarry’s books are famous for incorporating human traits and personalities into dozens of different animal species. His most famous titles have included Busy, Busy World; Busy, Busy Town; Best Word Book Ever; Best Bedtime Book Ever; Cars and Trucks and Things That Go; Please and Thank You Book; and What Do People Do All Day? Many of his most popular books have been adapted into animated films and compilations. Two of his titles, The Best Mistake Ever! and Other Stories and Pie Rats Ahoy!, were included in the Beginner Books series, while The Early Bird was part of the Bright and Early Books series.

It was during his stint as a textbook illustrator that Richard Scarry met his wife, Patricia Murphy, a children’s textbook writer. Later, Patricia would collaborate with Richard in the writing of many of his popular books, including Little Bear, The Bunny Book, Good Night, and The Fishing Cat. Scarry’s son, Richard Scarry Jr. (often known as Huck Scarry), followed in his father’s footsteps and became an accomplished children’s illustrator.

Much of Scarry’s work was completed in the Switzerland chalet he purchased in 1972 to use as a studio. It was there that he died of a heart attack in 1994 at the age of 74.